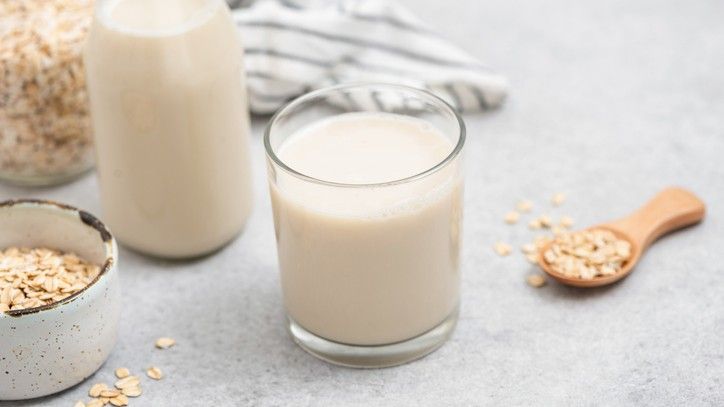 If you’re considering switching from dairy to plant-based milk, you may be wondering how oat milk compares in terms of nutrition. There are many reasons why you may consider the switch – lactose intolerance, environmental concerns, animal welfare and simple curiosity, to name just a few.

For many, picking the best milk alternative is a growing challenge. One look at the supermarket shelves will tell you that the range of available options is constantly expanding and more and more brands are offering plant-based products. According to Statista (opens in new tab), oat milk is the second most popular plant-based milk alternative in the US right now, right after almond milk.

But how nutritious is oat milk? And how does it compare to other plant-based alternatives? Keep reading to find out everything you need to know.

How long does oat milk last?

Just like dairy milk, oat milks can be divided into two categories: UHT (ultra-high temperature)/shelf-stable and fresh/refrigerated. The UHT drinks undergo extensive heat processing to increase their shelf-life, whereas the refrigerated ones don’t, making them less stable in room temperatures. As such, they come with different use-by dates and storage guidelines.

Shelf-stable oat milk typically has a shelf life of six to 12 months. The refrigerated ones tend to have a much shorter use-by date, usually a couple of weeks from when they were produced, and stay fresh for only about a week after being opened.

If stored in the fridge, UHT oat milk is safe to consume for about seven to 10 days after opening the carton or bottle.

What are the health benefits of oat milk?

Many people start their day with a steaming bowl of oatmeal. Oats are the perfect breakfast food – filling, fairly inexpensive and easy to combine with other ingredients, such as bananas, apples and nuts. This kitchen staple also boasts many health benefits.

According to a comprehensive review published in the Foods journal (opens in new tab), regular oat consumption can contribute to lower cholesterol levels, improved blood sugar metabolism, a healthier immune system and a more balanced gut microbiome. It’s also been shown to reduce the risk of developing heart disease, dermatitis (skin inflammation), and some forms of cancer.

These health-promoting properties can be credited to a range of important nutrients that this food contains. Oats are rich in complex carbohydrates, protein and dietary fiber, as well as many vitamins, minerals and biologically active compounds, such as beta-glucans and avenanthramides. Beta-glucans is a fraction of dietary fiber that has been shown to improve multiple cardiovascular, gastrointestinal and metabolic health indicators, as described in a review published in Nutrition Reviews (opens in new tab).

Avenanthramides, a type of phytonutrients specific to oats, may also boast a long list of potential benefits. According to an article recently published in the Journal of Agricultural and Food Chemistry (opens in new tab), avenanthramides may help to reduce inflammation, ease skin irritation, fight free radicals and prevent the formation and spread of several types of cancer. They may also aid weight loss and muscle recovery.

But does drinking oat milk bring about the same benefits as eating solid oats? By the nature of it, some compounds may be more diluted and less effective in a liquid form. So far, not much research has been done in this area, but the results from preliminary studies are promising.

A study published in the Annals of Nutrition & Metabolism (opens in new tab) aimed to compare the effects of oat milk, soya milk and cow’s milk on plasma lipid, glucose, insulin, and antioxidant status. After four weeks, participants who drank oat milk displayed on average a 4% drop in total cholesterol levels and a 9% drop in ‘bad’ low-density lipoprotein (LDL) cholesterol levels. At the same time, researchers from Nutrition Today (opens in new tab) point out that despite displaying some benefits on its own, adding oat milk to a diet that already contains oats does not appear to produce any additional effects.

Oat milk and almond milk top the sales charts in the US, so knowing how the two compare may come in handy next time you’re grocery shopping. The production process is similar in both cases: almonds and oats are soaked in water, blended and strained to remove the bulk of the solid components. Following this stage, many companies fortify their products with calcium, vitamin B12 and vitamin D.

However, if sustainability is close to your heart, you may want to consider that oats and almonds have different environmental footprints. Growing and harvesting almonds will require a much higher water usage, as described in the Global Food Security (opens in new tab) journal.

From a nutritional perspective, there will be a certain degree of variation across different products, especially if they are sweetened or flavored. Still, in their raw forms both oat and almond milk don’t contain much fat, sugar or dietary fiber. The biggest difference between them is their calorie content. Oat milk is rich in energy-dense carbohydrates with up to 20g per single serving, whereas almond milk may have as little as 1g of carbohydrate per cup.

Oat milk also delivers up to three times more protein, so If you’re looking for something more substantial, oat milk may be a better option. But if cutting down on calories is your priority, go for almond milk.

What’s more, they differ quite substantially in terms of their taste and texture. Oat milk is considerably thicker and creamier than almond milk. It may also be sweeter and have a richer mouthfeel. Almond milk, on the other hand, is more watery and has a stronger nutty aftertaste.

Both options work well in teas, coffees, protein shakes and fruit smoothies. However, due to its carbohydrate content, oat milk may perform better in baking goods and desserts.

Almond milk is free from gluten and soy, making it a suitable option for those with celiac disease, gluten sensitivity, or soy allergy. However, people with nut allergies may need to stay away from it. Oat milk in its pure form is safe for celiacs, but there’s a high probability of cross-contamination during the production process, so you may need to make sure that the oat milk of your choice is clearly labeled as gluten-free.

Is oat milk bad for you?

The research is clear – oats are highly nutritious and beneficial for our health. There isn’t nearly as much evidence in relation to oat milk, but it’s likely that it has similar properties to solid oats, albeit potentially less pronounced due to its high water content.

Still, there are some risks and considerations to oat milk consumption. Due to their beta-glucan content, oats can cause certain individuals to experience a host of gastrointestinal problems, such as bloating, gas and stomach cramps. Since beta-glucans are water soluble, they will be present in the milk as well.

Another aspect to consider is the sugar content in oat milks. Solid oats are rich in complex carbohydrates, but the milk production process may cause them to break down to smaller molecules. If the milk is additionally sweetened, that will elevate its sugar content further.

Lastly, though not very common, some people may suffer from oat allergy. For these individuals, it’s best to avoid drinking oat milk altogether.