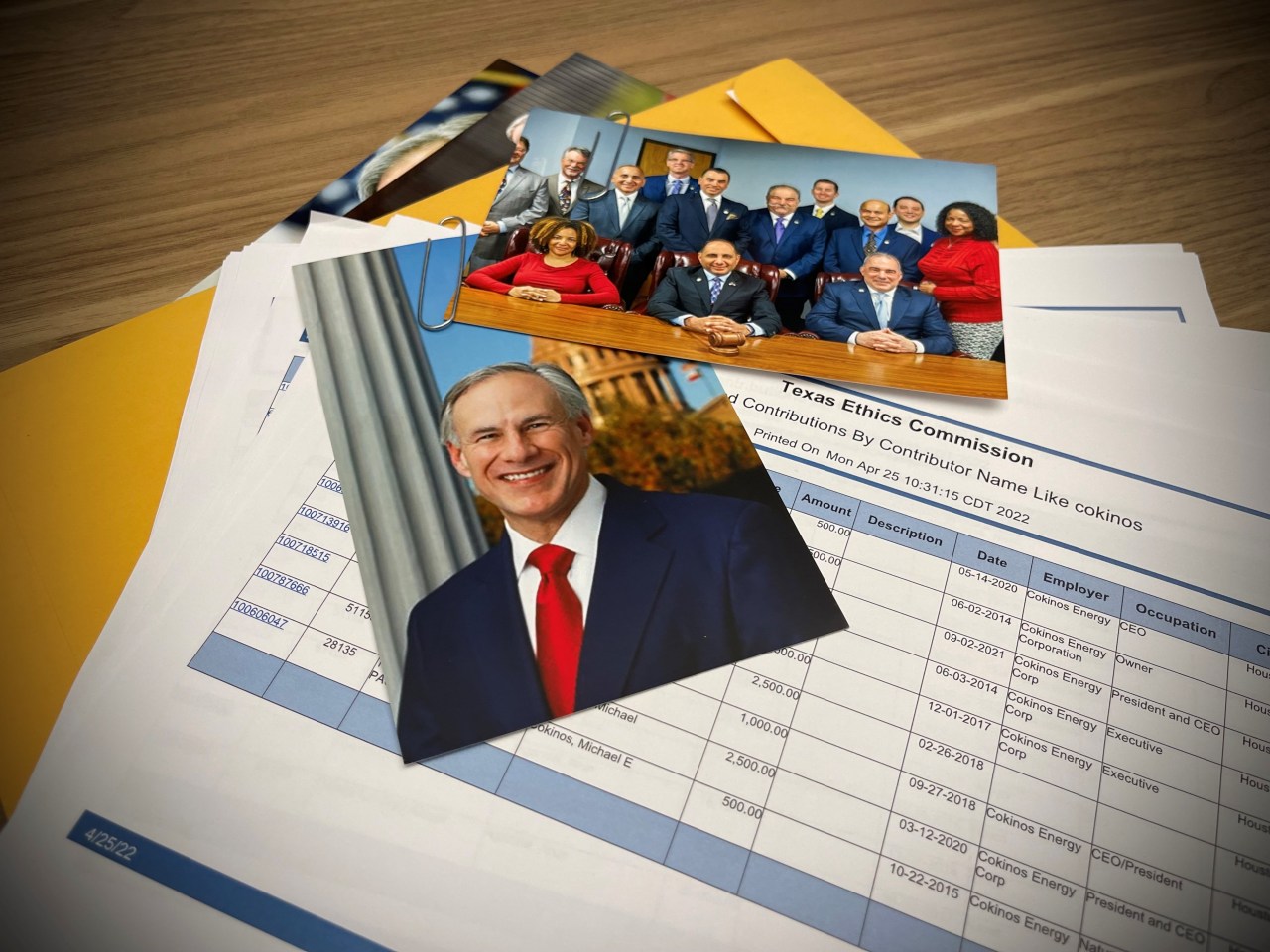 AUSTIN (KXAN) — Gov. Greg Abbott tapped top-dollar donors to sit on the Texas Medical Board. He also appointed members — tasked with representing the consumer — who come from telecom, business, real estate and energy sectors, with no obvious patient advocacy or medical experience, a KXAN investigation revealed.

The TMB’s mission is to “protect and enhance the public’s health, safety and welfare” but some advocates worry that comes with a political price tag.

‘Take politics out of patient safety’

KXAN wanted to see how money and politics intersect with patient safety in Texas. Digging through campaign finance records, we found several board members, appointed by the governor, who have collectively donated hundreds of thousands of dollars to Abbott’s campaign, according to records dating back to 2014.

By law, the 19-member medical board is in charge of licensing and regulating physicians in Texas. All are appointed by the governor to serve six-year terms. A dozen of the TMB board members — more than half — are doctors. Less than half, seven, are considered “public members.” These are members who, by design, have no medical background and help balance the board by defending the interests of patients and consumers. Advocates like this approach and have pushed for more outside representation on medical boards across the country.

The TMB’s website doesn’t specifically identify which of its members are “public,” like other states do. KXAN found some members, meant to represent the average patient and consumer, who don’t have an obvious track record of patient advocacy work but do have a history of donating to Abbott since 2014:

KXAN searched campaign records for every board member. In addition to Agarwal and Cokinos, we found five doctors gave the governor between $7,425 and $85,000, according to campaign finance records. The highest amount came from Dr. Sherif Zaafran, the board’s president.

KXAN analyzed every state medical board in the country. In nearly every state, board members are governor-appointed. Texas is tied for second with the most number of public members on its board. Despite that, Wendell, and others, worry that appointing donors allows for the potential to politicize these positions.

“We need to take politics out of patient safety,” he said.

KXAN put together a map showing the make up of every state medical board in the U.S.

That is especially true in Texas, Wendell said, after a series of KXAN investigations revealed the TMB is not following the law by keeping dozens of out-of-state disciplinary records secret and allowing some physicians the board deemed “a threat to public welfare” to keep practicing, with restrictions.

A TMB spokesperson declined an on camera interview but in a statement defended the way physicians are disciplined and said the agency “does not have appointment authority” when it comes to who gets to sit on the medical board.

“The TMB does not control the selection/appointment of Board members,” TMB spokesperson Jarrett Schneider wrote in a statement. “Requirements of individual board members are set out in state law as you noted. The Governor has appointment authority with the Texas Senate giving confirmation.”

TMB Insider: ‘It is very political’

At least one current TMB employee believes the governor should appoint public members with backgrounds in patient advocacy and safety work. KXAN agreed to conceal this person’s identity because they are not authorized to speak to reporters and could be fired for doing so.

“I’m not shocked that these people who are appointed are big donors,” the employee said. “I don’t think it should be that way. It is very political.”

This insider believes the current system allows “bad doctors” to keep practicing, which they say is “sad.”

“We do not have a comment regarding remarks from an unnamed individual,” Schneider said.

“Typically in Texas,” she said, standing in front of the Capitol, “donors get appointed to these important boards. I’ve seen that for 30 years.”

Like Wendell, McGiffert is also pushing for legislation in response to what KXAN uncovered. In 2017, she added her name to a letter sent to Abbott, which was signed by more than a dozen consumer advocates. The letter asked for more public members to be appointed to the medical board. The letter was sent to all 50 states.

“Your state Medical Examining Board is an essential organization protecting citizens from unprofessional and incompetent doctors,” the letter said, according to an email of it, which was forwarded to KXAN. “Public members (sometimes referred to as citizen or consumer members) play a critical role on Medical Examining Boards. Because they should be free of financial and other professional ties to the health care professions, their experience can ground a medical examining board and provide insight and common sense to deliberations.”

The coalition recommended appointing public members with a “demonstrated interest in health care safety” and “a track record of consumer and/or patient interest advocacy.”

McGiffert said she never heard back.

The governor’s office did not respond to multiple requests for comment.

“Your reporting has uncovered ways that the Texas Medical Board has not always taken the public’s interest — in actions against doctors who were harming patients, and in some cases, repeatedly harming patients,” McGiffert said. “I think people, absolutely, who are patient advocates, should be considered [for board-appointment].”

‘This remedial plan is non-disciplinary’

McGiffert and Wendell are both concerned about what KXAN uncovered, including possible conflicts of interest. Last year, TMB board member and physician Dr. Satish Nayak — who donated $38,920 to the governor — entered into a “remedial plan,” according to the TMB’s public records. The board determined he “failed to keep adequate medical records for multiple patients.”

Under the Texas Administrative Code, that constitutes “grounds for potential removal” from the board by the governor. Two of Nayak’s fellow board members offered him the opportunity to take an eight-hour class as part of the remediation plan. Towards the bottom of the board’s order against Nayak, written in all caps and bold letters, the board wrote: “THIS REMEDIAL PLAN IS NON-DISCIPLINARY.” The governor did not respond to requests asking if he is aware of this or made attempts to remove Nayak.

According to the TAC, a board member who is the “subject of a non-disciplinary or disciplinary action, including but not limited to any remedial plan, board order, or administrative penalty, regardless of the nature of the violation(s)” can face “potential removal.”

The American Medical Association writes doctors have an “ethical obligation” to manage records appropriately, which serve “important patient interests for present health care and future needs, as well as insurance, employment, and other purposes.”

The TMB’s spokesperson deferred to the governor.

Records detailing Nayak’s initial complaint are not on the TMB’s website for the public to view. The TMB says complaint records are confidential. The action was also not posted in the TMB’s quarterly bulletin, even though actions taken against other physicians were, for similar offenses.

“Remedial plans are ‘non-disciplinary’ actions by statute and are not included with disciplinary orders in publications such as the TMB bulletin,” Schneider said. “However, they are public documents and are posted to the online profiles as required by law. Remedial Plans were created by state law enacted in 2011. All physicians receive the same treatment regarding the posting of Remedial Plans.”

Schneider would only say “each case will have its own set of facts that must be evaluated regardless of sharing similar allegations.” He denies Nayak received any preferential treatment.

These Texas doctors were deemed a ‘threat’ to patients. Why were they allowed to keep practicing?

“The enforcement process is the same whether the individual is a Board member or not,” Schneider said. “The entire process, including who hears the case, follows all statutes and rules just like every other physician. TMB has no authority to create a separate process for TMB-licensed Board Members with alleged violations.”

These type of standard-of-care violations are reviewed by expert doctors, not affiliated with the TMB, Schneider said, who are from outside the area where the complaint was made.

KXAN reached out to Nayak along with other TMB board members identified in this report for comment but did not hear back.

Gov. Greg Abbott appointed people to the Texas Medical Board who donated to his campaign (KXAN Photo/Josh Hinkle)

Gov. Greg Abbott appointed people to the Texas Medical Board who donated to his campaign (KXAN Photo/Josh Hinkle)

More people are moving to these TX cities than Austin