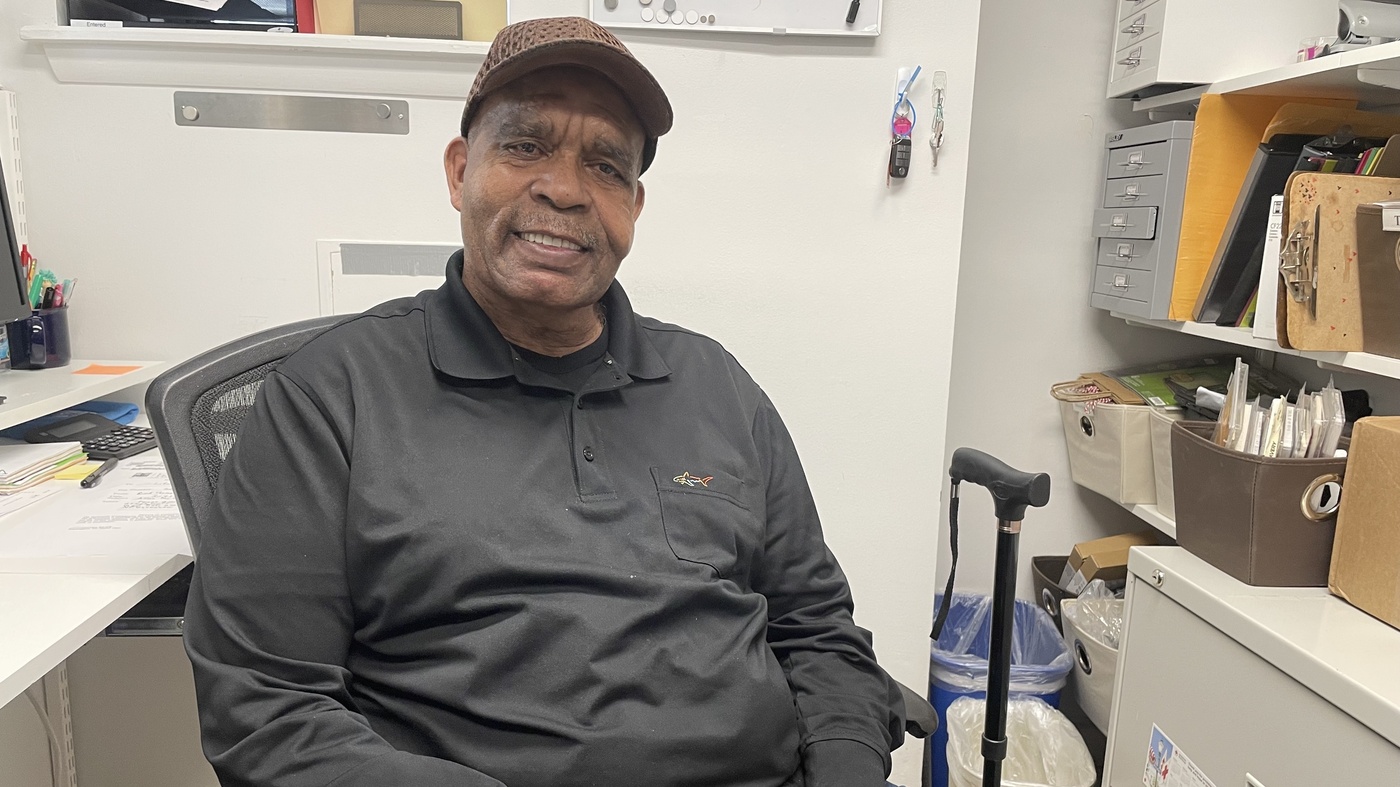 Henry Jones, who kept getting sicker after 11 years of homelessness, was admitted in 1991 into Christ House, one of the first medical respite programs in the country.

Henry Jones, who kept getting sicker after 11 years of homelessness, was admitted in 1991 into Christ House, one of the first medical respite programs in the country.

Henry Jones felt like he was at the end of the line in the summer of 1991.

“There was no way out,” he remembered thinking. “I prayed and was tired, but I couldn’t see no way out.”

Jones had been homeless in Washington, DC for 11 years, and the years had taken their toll. “I started to get sicker and sicker,” he said. “I could feel my health failing.”

One hot morning in June, Jones was in particularly rough shape — his legs ached, his stomach hurt, and his arms were trembling. A security guard had to give him a ride from the hospital parking lot to the ER because he could barely stand.

The hospital wouldn’t admit him, but a social worker referred him to a place called Christ House, a facility for homeless men who were too sick to be on the streets or in a shelter, but not sick enough to require hospital-level care.

Today, there are a growing number of programs like Christ House that provide short-term medical care for homeless people, known as medical respite or recuperative care. The growth is fueled in part by a push from state Medicaid programs to provide support to patients to prevent avoidable health care use, like emergency room visits.

“We saw sick homeless persons getting worse and worse who were out on the street,” said Dr. Janelle Goetcheus, who started the 34-bed facility in 1985. “So we just wanted to have a place where they could come and be cared for.”

By the time Henry Jones arrived in 1991, Christ House was admitting more than 300 people a year.

“I couldn’t believe what I was seeing,” Jones said, remembering his first day. “I was sleeping in a nice, clean bed. I was getting some good food to eat. The nurses and the doctors, they were so concerned. They just wanted me to get better, and I could see that.”

Medical respite on the rise

Christ House was one of the first medical respite centers, and it’s now one of 133 programs spread across 37 states and Washington D.C. They all offer homeless people a safe place to recover from surgery or other acute illness, learn to manage a chronic condition and get help finding permanent housing.

But the programs are unregulated and unlicensed, and they often look incredibly different from one another, according to Julia Dobbins, the director of medical respite for the National Health Care for the Homeless Council.

The most common setting is a homeless shelter — a few beds or a room set aside with a nurse coming by to check in once a day. Others, like Christ House, have their own building and include full-service kitchens, social spaces, exam rooms and round-the-clock medical care.

In the last seven years, the number of medical respite homes has more than doubled, driven by multiple factors.

First, the number of homeless people grew every year from 2016 to 2020, topping out at nearly 600,000. The homeless population is also getting older and sicker. Research shows homeless people in their 50s are in worse health than folks in their 70s who have a place to live, and half of homeless adults are over 50.

At the same time, doctors, health care executives, and state and federal policymakers have begun to accept that non-medical factors like housing impact people’s well-being and that the health care industry should do something about it — like medical respite.

Maybe the most surprising driver of medical respite’s growth is interest from managed care organizations — the private insurance companies that cover 7 in 10 people on Medicaid.

Most medical respite programs have multiple funding sources. Hospitals, philanthropies, and state and local governments have historically been the most common, but about 1 in 3 programs now receive some funding from Medicaid plans.

Dobbins said this started when the Affordable Care Act allowed 38 states and Washington D.C. to expand Medicaid to low-income adults with no children, bringing thousands of previously ineligible homeless individuals onto Medicaid.

A resident watches a cooking show in the living room at Hope Has a Home medical respite in Washington, D.C.

A resident watches a cooking show in the living room at Hope Has a Home medical respite in Washington, D.C.

AmeriHealth estimated it provided Medicaid benefits to around 3,500 homeless people, and some of them used the hospital and ER a lot. The company ran the numbers and was persuaded medical respite could improve people’s health, help the business avoid financial penalties, and save up to $200,000 a year.

From there, they partnered with other local organizations to launch Hope Has a Home, two new eight-bed medical respite facilities that opened in 2019 and have served 62 homeless men so far.

“I thank God for this place,” said Wayne Gaddis, a 58-year-old who came to Hope Has a Home after undergoing spinal surgery. “If I wasn’t here, I would have been on the streets, probably back on drugs, killing myself slowly, not taking my medication, not caring because I feel no one else did care. But this place, it gives me new hope. A new life.”

The need for more evidence

There have been around 20 peer-reviewed articles on medical respite, which Dobbins of the National Health Care for the Homeless Council and her team recently reviewed. That research strongly suggests people who use medical respite spend less time in the hospital, are less likely to be readmitted to the hospital, and are more likely to use primary care.

But much of the existing evidence has been self-published by medical respite programs, and no one has conducted a rigorous randomized controlled trial in the U.S.

“Unfortunately, there’s not as much literature in the field as we wish there was,” said Dobbins.

And there’s even less evidence on whether medical respite is likely to save insurers money.

Paying a few hundred dollars a day to send someone to medical respite is certainly cheaper than paying thousands of dollars a night for them to stay in the hospital. But it can also extend someone’s life and uncover chronic conditions that will need years of management.

“We cannot underestimate how sick [homeless] folks are,” Dobbins said.

Case in point, AmeriHealth Caritas DC says the first 11 people they sent to Hope Has A Home went to the ER less. But their primary care visits skyrocketed, helping send total costs of care up 75%.

It’s just a small sample, and AmeriHealth remains committed to medical respite with plans to launch two facilities for homeless women next year.

“Everything we do might not necessarily have a cost savings,” said Dr. Karyn Wills, chief medical officer for CareFirst, another Washington managed care organization that started paying for medical respite in 2021. “It is important, but it’s not our primary driver.”

Policymakers in Washington state, Minnesota, Colorado and New York are exploring how they could expand access to medical respite through Medicaid. But a major roadblock remains.

The federal Centers for Medicare and Medicaid Services is forbidden from paying for “room and board,” which has prevented medical respite from being covered by Medicaid the same as other services like a doctor’s visit or nursing home stay.

Managed care organizations have to set up individual contracts with each medical respite provider, and the money they spend on respite does not get factored into their annual contract negotiations with state Medicaid programs to determine how much state and federal money they receive.

In 2022, California became the first state to get a waiver from CMS allowing medical respite to be a covered benefit. Utah is in the process of getting its own waiver, more evidence that CMS is open to this experiment.

A bedroom at Christ House, a medical respite facility in Washington, D.C.

A bedroom at Christ House, a medical respite facility in Washington, D.C.

Respite providers, insurance companies, advocates and policymakers agreed that a bigger shift in CMS’ policy could open the floodgates to more medical respite. But even if that happened, it would still likely only touch a fraction of the nearly 600,000 homeless people in the country.

“We are not going to end this crisis with medical respite beds alone,” said Julia Dobbins. “Medical respite care is not housing.”

Forty percent of Christ House residents over the last three years have been discharged to a shelter or back on the streets. A similar share at Hope Has a Home also left without finding a stable place to live.

The lack of affordable housing forces respite homes to choose between releasing someone back to homelessness or keeping them in a bed that someone else needs.

“We have to always be talking about access to affordable housing for folks experiencing homelessness,” Dobbins said. “Otherwise, we’re going to just keep talking about developing more and more respite programs. And while I’m here to support them, that is not my goal long-term.”

This story was produced by Tradeoffs, a podcast exploring our confusing, costly and often counterintuitive health care system.