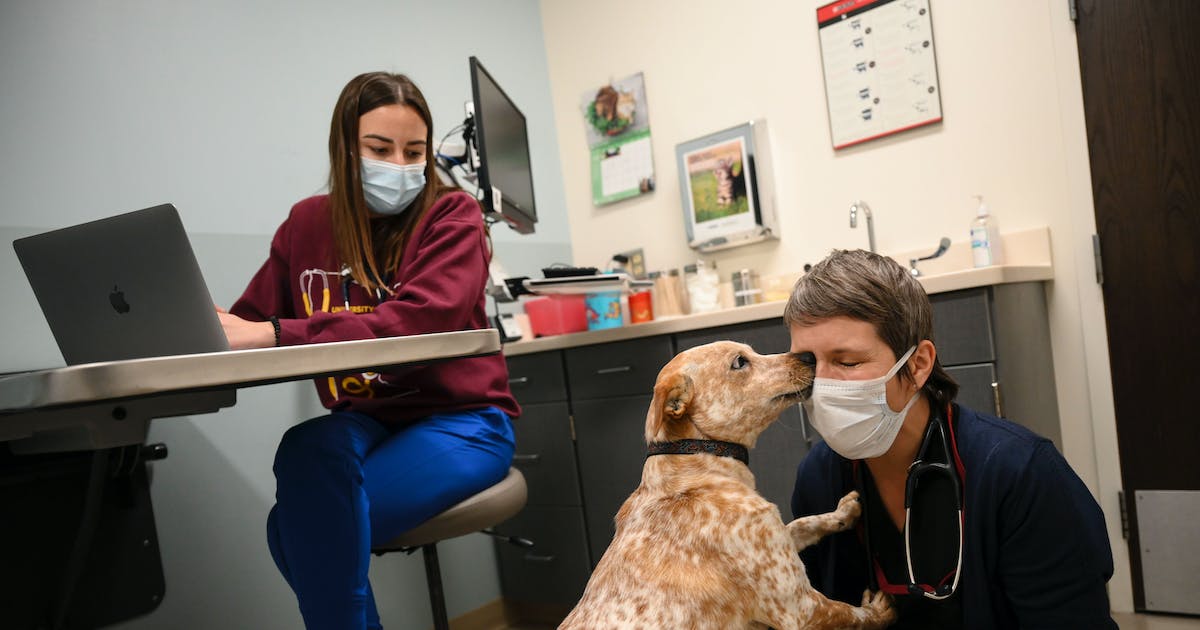 After dozens of desperate phone calls to local veterinary clinics, Peggy Sheldon was anxious to get help for her very sick, 7-pound puppy.

Not only was her local clinic in Northfield booked out for weeks, but so were a string of others she called across the Twin Cities. Her dog was struggling to keep food down and spraying blood while urinating, but emergency clinics were deluged with more dire cases.

The COVID-19 pandemic, which has created shortages in everything from toilet paper to restaurant staff, also has taken a toll on veterinary clinics, making it tough for many pet owners to find animal care.

“I alternated between feeling angry and helpless,” said Sheldon, who spent weeks in search of answers and then a needed surgery, for Brie, her Teddypoo pup. “[The clinics] were swamped.”

Many veterinarians in Minnesota and across the country are struggling to overcome a backlog of cases that began early last year when the pandemic forced clinics to shut down except for emergency services.

“We were trying to preserve PPE [personal protection equipment] for the human side of care,” said Dr. Connie Sillerud, president of the Minnesota Veterinary Medical Association.

When clinics reopened several months later, many restricted the public from their facilities, often requiring pet owners to remain in their cars while veterinary staff took the animal inside for care. Veterinarians often communicated with pet owners via the phone after the exam.

“Usually you would have talked to them during the exam,” Sillerud said. “So a visit that normally took 15 minutes became 35 to 40 minutes.” The result: Veterinarians saw fewer patients in a day, making it difficult to tackle a rising backlog of cases.

Twenty months later, many primary care and emergency clinics are still overwhelmed — a crisis that has some pet owners waiting weeks to get a primary care appointment and months for specialty care, Sillerud said.

Some veterinarians say one reason for the uptick in demand is likely because more people got pets while hunkered down at home. But data from the Humane Society in Minnesota and a national veterinary organization indicate a pandemic pet boom may be overstated.

The Humane Society in Minnesota typically tallies 15,000 to 18,000 adoptions a year, but that number dropped to about 11,000 in 2020 — the first year of the pandemic, according to Dr. Graham Brayshaw, the Humane Society’s director of animal services. Adoption numbers likely will hit 10,000-plus this year, he said.

Nationally, the approximate 2.3 million animals adopted in 2020 from more than 4,000 shelters was the lowest number in five years, according to the Journal of the American Veterinary Medical Association. The decrease likely is because COVID restrictions slowed the adoption process and fewer animals were available in part because the number of people who relinquished pets was down and animal control was less active in picking up strays, according to the journal article.

While shelter adoptions dropped, Brayshaw said some breeders may have gotten more calls for pets. “Desire shot up through the roof,” he said. “Everyone wanted a puppy, so a breeder who made a good living are now booked years out or several months out.”

“People would say, ‘Oh my god, my dog is lethargic. He’s sleeping all the time,'” said Jodi Harrod, hospital administrator at South Metro Animal Emergency Care in Apple Valley. “But that’s what dogs do when you’re not home all the time.”

Her clinic also got more calls for chronic conditions that pet owners likely hadn’t noticed before.

When some pet owners couldn’t get in quick enough to see their primary care veterinarians, they lined up outside emergency clinics, Harrod said.

“Our business at the emergency clinic tripled when the pandemic hit and it hasn’t stopped,” she said. “Before the pandemic, we would have 15 cases on a weeknight. Now we have 30 to 45. On weekends, the typical wait time for a non-critical [issue] is averaging four to six hours.”

But now the intensive care unit frequently is at capacity because of space and/or staff limitations.

“The fact that we can’t serve them immediately creates significant moral stress that affects the veterinary teams,” Henson said.

“But it’s getting to the point where people are downright rude to us,” she said. “They call us names. They curse. It gets old really, really fast.”

Recently, a pet owner screamed at Harrod after noticing other dogs going ahead of his into the clinic during his four-hour wait. “I said, ‘You’re right. But if you noticed, a lot of them didn’t come back out,'” she told him. “We did a lot of euthanasia that evening and his dog had a minor injury.”

At times, her staff euthanizes as many as 14 to 16 very sick animals in an evening, Harrod said. “That takes a toll on staff,” she said. “It’s very draining.”

Compassion fatigue, exhaustion and stress were bubbling under the surface even before the pandemic hit. “Then a lot of people got burned out during COVID and left,” Sillerud said.

In 2016, data showed that the career life of a vet tech was five to seven years and now it’s down to four years, said Allen Balay, who chairs a committee examining the vet tech shortage for the Minnesota Veterinary Medical Association.

A push for legislation is underway to license vet techs in an effort to raise their stature and pay with hopes of attracting and retaining them.

Meanwhile, the backlog of cases is beginning to shrink.

“It’s slowly going to turn around,” Sillerud said. “It will probably take another six months to get back on track.”